Can State Governments Own Rights in Copyright? 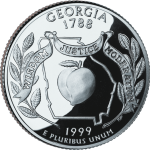 I was browsing through my copy of the “Copyright Law of the United States,” which I purchased from the Government Printing Office some years ago. I noticed that inside the opening pages where you would normally find a copyright notice, the page contained a quote from the United States Constitution:

The Congress shall have Power… To promote the Progress of Science and useful Arts, by securing for limited Times to Authors and Inventors the exclusive Right to their respective Writings and Discoveries.

But no copyright notice. Why?  The answer is contained in Section 105 of the U.S. Copyright Act:

Copyright protection under this title is not available for any work of the United States Government ….

There are some exceptions, though.  The government may hold copyrights that are assigned or bequested to it; works created by the U.S. Postal Service, the Corporation for Public Broadcasting, Public Broadcasting Services, or National Public Radio may be registered; the U.S. Secretary of Commerce may hold copyrights in any standard reference data prepared or disseminated by the National Technical Information Service; and any work created by a government employee outside the scope of the author’s official duties may be registrable.

That question was recently answered by the United States District Court for the Northern District of Georgia in an interesting lawsuit by the Code Revision Commission and State of Georgia against the Public.Resource.Org., Inc. over alleged copyright infringement of the official Georgia code by Carl Malamud, an open records activist who runs Public.Resource.Org (“Making Government Information More Accessible”).  He purchased a hard copy of the official Georgia state laws from LexisNexis, the authorized publisher, which cost him $1207.02. Malamud sent scanned copies of the laws to the Georgia speaker of the house, David Ralson and other state legislators. His organization also posted them on its web site.  Malamud reminded the legislators that the law isn’t copyrighted and that “access to the law is a fundamental aspect of our system of democracy, an essential element of due process, equal protection, and access to justice.”

The state replied by issuing him a cease-and-desist letter stating that his “unlawful copying… Infringes on the exclusive copyright of the state of Georgia.”  The chairman of Georgia’s Code Revision Commission, Josh McKoon, referred Malamud to the Georgia State website, where an unofficial and un-annotated copy of the Georgia laws could be read for free. Malamud responded that the public copy was not “free” because users have to agree to onerous restrictions contained in two separate terms of use. The terms include agreeing not to make copies, and using the code in “newsletters” and “articles.”

As reported by ArsTechnica, Georgia views its state laws as two separate documents, the un-annotated text, which is available free to the public on the state web site, and the official annotated text, which contains references to court decisions pertaining to each law. The annotations, according to the state, are protected by copyright law. Malamud sees it differently because the annotated version of the law, is the “Official Code of Georgia,” not the un-annotated version.

In March 2017, the District Court handed down an opinion in favor of the Code Revision Commission. The court held that the Georgia State Law was subject to copyright protection because the annotations, which are not government edicts, are to be considered “original works entitled to broad copyright protection.”  It further held that Public.Resource.Org’s use of the work (i.e., posting the code on its web site, and copying the statutes in full and sending them to the legislators) did not qualify as “fair use” under the Copyright Act.  You can read the details of the court’s reasoning here.

Don’t know whether your government publication is protected by federal copyright law, contact the lawyers at Lipton, Weinberger & Husick and they can help you sort it out.