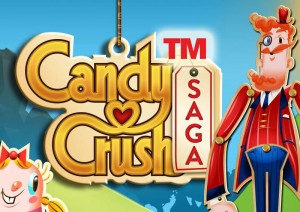 Have you ever played the mobile app game, “Candy Crush Saga” by King.com, Ltd. (“King”)?  Are you addicted to it?  Not me, you say.  More power to you because by some reports King earns a million dollars a day from users who actually pay for the chance to continue using this “free” game.  The way it works is that after so many moves or lives, the player has to wait a period of time before he or she can play again.  Some people — more than a million per day — can’t wait and opt to spend .99 to avoid the delayed gratification.  A brilliant business model!

In its quest to rule the mobile device game world, King filed a trademark application for the term CANDY, identifying software related products, clothing (say spin-offs), and educational services (say what?).  You might ask how in the world a software gaming company can claim rights to the term “candy”.  What about Hasbro’s Candy Land and the myriad other candy themed games?   Apparently, the U.S. Patent and Trademark Office (“PTO”) did not see it that way.  No one else had applied for CANDY in the same or related product space and it was King’s to take. And so the PTO noticed the trademark for publication (the penultimate step in the registration process).  Apple, Inc. soon began enforcing King’s trademark rights in its App Store, demanding that developers remove copycat apps as well any game apps using the term “candy”.  King also embarked on a campaign to enforce its trademark rights in CANDY and the term SAGA.

Then the hue and cry!  Across the blogosphere, software developers called foul by the PTO for approving King’s registration of CANDY and criticized the filings as “overreaching” and “predatory.”  Independent game developers were so incensed that they created an online event dubbed “Candy Jam“, inviting developers to create games that use the word “candy.”  Participants created more than 450 games!  Then, two events occurred.  King announced that it was going public with a $500 million dollar initial public offering and, lo and behold, it voluntarily abandoned its trademark registration application for CANDY.  King CEO Riccardo Zacconi repented, saying that his company was “not trying to control the world’s use of the word ‘Candy’…only trying to prevent other from creating games that unfairly capitalize on our success.”  In another statement, King noted that its action did not affect its European registration for CANDY and that it would continue to protect its trademark rights.

So why would King abandon its U.S. trademark application?  A little controversy over a trademark should not deter enforcement of intellectual property rights. True, but the stakes here are enormous.  Apparently, game developers stirred the pot enough to cause King to worry about  the negative consequences of the trademark filing and enforcement furor to its $500 million dollar IPO.  To calm the storm of public opinion, it abandoned its trademark claim to CANDY.  The “saga” demonstrates the power of public opinion when trademark owners are perceived to overreach, particularly when large amounts of cash are at stake.  Sweet!