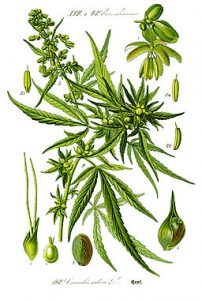 Marijuana has become big business. We never thought it would happen but now  29 U.S. states and the District of Columbia have legalized medical marijuana and eight states have legalized pot for recreational use. But alas, federal law, still classifies cannabis as a Schedule I controlled substance under the Controlled Substances Act meaning that cannabis possession is still illegal under federal law.   How does this affect intellectual property rights?  The United States Patent and Trademark Office (PTO), the federal agency responsible for granting patents, has historically taken a hands-off approach to barring particular kinds of inventions from patentability.  If a  cannabis-related patent application meets the legal standards for patentability, the PTO will grant a patent.

On the trademark side, much to the disappointment of the cannabis industry, the federal rules are very different.  Under the U.S. Trademark Act, one can obtain a trademark for any lawful use under federal law.  Cannabis and many cannabis-related products, not being lawful under the Controlled Substances Act, will be denied trademarks.  The PTO generally does not inquire as to the legality of an applicant’s use of a trademark but it can and will do so if the record demonstrates or suggests a violation of the law.  So, if you want register a trademark for glass pipes, for example, the Trademark Examiner will demand a statement from the applicant that all the goods identified in the application comply with relevant federal law, including the Controlled Substances Act.  Don’t think of misleading the PTO on this score because if it comes time to enforce your trademark – that’s why you have it, after all – and it is determined that you committed a fraud on the PTO, you will lose your trademark rights including your ability to enforce your trademark.   Clearly, applying to register a trademark for cannabis or a cannabis derived product is a non-starter. Right now there is little a brand owner can do on the federal level.  Yet, there are signs that the trademark regulations are relaxing.  Starting in 2018, California – a state in which both medical and recreational cannabis use is legal – is permitting registration of cannabis-related trademarks.

One commentator has observed that counterfeiting has been a prevalent problem in the cannabis market and that California’s permitting registration of cannabis – related trademarks is a huge step forward for establishing “consumer trust and loyalty within the state’s marketplace.”  According to the same author:

Cannabis flower, and the concentrates made from it, are difficult products to brand. Due in no small part to the confusing way marijuana has been named over the years. Some cultivators and [sic] have developed strains through generations of selective breeding only to have that name used by other growers with a similar plant. The ability to trademark cannabis products within the state alleviates some of this concern for new products but comes with challenges for existing strain names.

California has taken a step towards stabilizing its cannabis industry and other states where the products are legal are likely to follow suit.  Perhaps, in the long term, developments in state law may persuade federal law makers to follow suit.