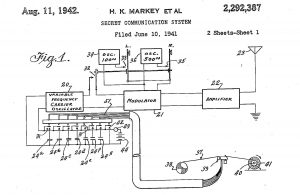 Last week Zeitgeist Films released a biopic of Hedy Kiesler Markey, an inventor of U.S. Patent 2,292,387.  This WWII patent envisioned that jumping between radio frequencies would avoid jamming of radio-guided torpedoes.  The U.S. Navy rejected the frequency-hopping invention at the time and did not adopt the technology until much later.  Frequency hopping is now widely used in military, cell phone, Bluetooth, and other applications.

Ms. Markey, an Austrian refugee, was (and is) better known by her stage name, Hedy Lamarr.  The film is “Bombshell: The Hedy Lamarr Story.”  Here are links to the trailer, the New York Times review , and an article in Marketplace.org.