Smelling the Doh – – Registering an Iconic Smell with the USPTO 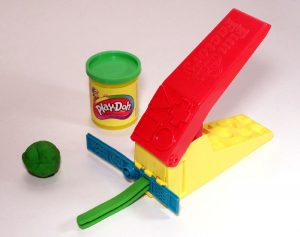 The distinctive smell of Play-Doh evokes memories of many happy hours of childhood play, those of my children and mine. Perhaps, if you played with the colored “doh,” you probably share similar nostalgia.  Hasbro has been making Play-Doh since the 1950’s and its distinct odor is not natural but a fragrance that Hasboro added to the Play-Doh formula way back when.  Yet, Hasbro only recently convinced the U.S. Patent and Trademark Office (“USPTO”) that the scent deserved trademark protection.  On May 18, the USPTO approved Hasbro’s trademark application for the modeling clay’s “sweet, slightly musky, vanilla fragrance, with slight overtones of cherry, combined with the smell of a salted, wheat-based dough” (Reg. No. 5467089). Why did it take Hasbro so long to seek trademark protection?

We do not know exactly why Hasbro delayed seeking protection for the Play-Doh fragrance but we can take a guess. In the first place, scent trademarks are uncommon probably because there is a high bar for qualifying a scent for trademark protection. A trademark applicant must, first, provide evidence that the scent is not a natural or inherent feature of the goods, that is, it does not provide any utilitarian advantage. And, second, the applicant must prove that the scent is distinctive as a source identifier (that’s what a trademark does).  It was not until 1990 that the USPTO first granted a trademark for a fragrance in the matter of In re Celia Clarke.  In that case, the applicant applied for a trademark to identify scented embroidery yarn with a “fresh, floral fragrance reminiscent of Plumeria blossoms.”  Initially, the USPTO rejected the application on grounds that the scent did not distinguish the applicant’s goods from those of others and consumers would not perceive the scent as an indication of origin. The Trademark Trial and Appeal Board overturned the Examiner and held that there was sufficient proof by the applicant that the scent of her product was nonfunctional and served to distinguish its products from those of others. The Board concluded that “under the circumstances of this case, we see no reason why a fragrance is not capable of serving as a trademark to identify and distinguish a certain type of product.” Thereafter, the USPTO published guidelines for registering scents and fragrances but required considerable evidence of acquired distinctiveness.

Under the current guidelines, Hasbro’s application was not a slam dunk. In fact, the Trademark Examiner initially refused registration on grounds that the scent was non-distinctive and that Hasbro’s claim of acquired distinctiveness, having used the mark for more than five years, was insufficient. Hasbro filed a lengthy response detailing the history of the brand and its distinctive odor, submitted several samples of other modeling clays with their own distinctive sense, provided a lengthy affidavit and multiple references to press accounts of the Play-Doh product and its “legendary” smell, and submitted a lengthy affidavit that answered 15 technical questions posed by the USPTO concerning the distinctive scent. The USPTO was convinced and granted Hasbro a trademark registration.

The USPTO has granted other “scent” applications, for example:

Most of these trademarks are registered in the supplemental register indicating that the owners were unable to prove that their marks had acquired distinctiveness.  The supplemental register is a holding area for descriptive and other non-distinctive marks.  Once such marks have been in use for five years or more, the owner can refile for registration in the Principle Register of the USPTO.

Let us know if you have a “smelly” trademark that makes your product distinctive, the lawyers at LWH would be pleased to evaluate it.