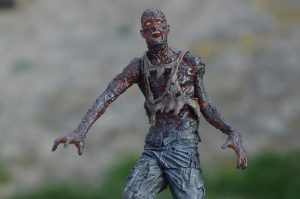 Here’s a familiar situation: the shuffling figure, arms outstretched moving slowly toward you, emitting indecipherable moans, munching on what could be human brains…  And the universal question: Is that a zombie or is it your teenage offspring?  The answer will determine whether you dispatch it in the most grisly way imaginable or feed it mac-and-cheese.

.
Fret not.  A new invention offers a solution to this age-old conundrum.  U.S. Patent 9,366,633 issued June 14, 2016 to Szu et al., addresses a ‘…hand held Raman laser device…for distant life-death determination.’ The Invention works by shining a laser through a plume of gas emitted from the distant zombie-like object in question.  If Raman backscattering of the laser light detects molecules that are released only upon death, then it’s a zombie.  If special cameras detect signs of life such as respiration, then it’s time to warm up the cheddar.
.
Notable insight from the patent:  “People who are alive have higher energy than deceased people.” (col. 1, line 65)
.
Now we know why the undead move so slowly.
.
Happy Halloween!
.
— Robert Yarbrough, Esq.
halloween, patents, zombies
November 1, 2018