Back in April 2013, you wrote about how Richard Prince drew a few electric guitars and naughty bits on photos taken by photographer Patrick Cariou, and then sold them to Beyoncé, Giselle, and other really famous people for tons of money.  I seem to remember that a court said that was okay, and not an infringement on Cariou’s copyright, or some such idiocy. What’s Prince been up to lately?

Dick’s been up to it again. Most recently, he downloaded a bunch of photographs posted to Instagram by other users, added his own comments, and printed these out on big canvasses. He has shown these in the Gagosian Gallery (the same one that sold the Cariou markups) for (are you sitting down?) around $90,000 each. The folks that posted their photos on Instagram have confirmed that Prince never asked for their permission to do this…he just downloaded the images, printed them, and sold them. (Interestingly, the press release for the exhibition notes, “All images are subject to copyright. Gallery approval must be granted prior to reproduction.”) 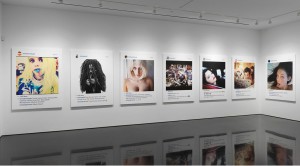 Photo of the exhibition of Prince’s canvasses…

So what do art critics (at least some of them) think of Prince’s work? Jerry Saltz, from New York Magazine, writing on the website “Vulture” gushed, “Here he [Prince] is delving as deep as he ever has into privacy, copyright, and appropriation, twisting images so that they actually seem to undergo some sort of sick psychic-artistic transubstantiation where they no longer belong to the original makers.”

Some of the Instagram photos that Prince used were posted by the founder of the website “SuicideGirls”. In response, she said on Reddit, “Everyone has been asking me what I thought about famous controversial artist Richard Prince taking a series of SuicideGirls Instagram posts and printing them out and selling them at a recent gallery show at the gagosian gallery of beverly hills for $90,000 a piece. My first thought was I don’t know anyone who can spend $90,000 on anything other than a house. Maybe I know a few people who can spend it on a car. As to the copyright issue? If I had a nickel for every time someone used our images without our permission in a commercial endeavour I’d be able to spend $90,000 on art.”

In reaction, she decided to make Prince’s “art” affordable…”I’m just bummed that his art is out of reach for people like me and the people portrayed in the art he is selling.  So we at SuicideGirls are going to sell the exact same prints people payed $90,000 for $90 each. I hope you love them. Beautiful Art, 99.9% off the original price. 😉 … Do we have Mr. Prince’s permission to sell these prints? We have the same permission from him that he had from us. ;)”

According to the Copyright Office’s Circular 14, “A derivative work is a work based on or derived from one or more already existing works. … Only the owner of copyright in a work has the right to prepare, or to authorize someone else to create, an adaptation of that work. … The unauthorized adaption of a work may constitute copyright infringement.” Because nobody has yet brought a law suit against Prince over these Instagram pictures, we may never know whether his actions actually constitute copyright infringement. Past cases, like that the “Doc” wrote about in 2013 over the Cariou photos, lead us to believe that as long as people who are famous continue to pay $90,000 each for them, judges will keep looking the other way.

Want to just blatantly steal someone else’s copyrighted work? Don’t have a hoity-toity New York art gallery that will sell the stuff for big bucks? Better check with the attorneys at LW&H first. After all, in much of the country outside the Second Circuit, copyright law still protects the little guy, and you could get in really big trouble for infringing copyright.