I saw that the Charging Bull sculpture near Wall Street has a new “companion” sculpture called “Fearless Girl”, and that the artist who created the bull is none-too-happy about it. He says that the new sculpture changes the meaning of his sculpture from what he intended: “the strength and power of the American people” to something else, entirely…a symbol of patriarchal oppression. Can the guy who created the bull get rid of the little girl? What’s up?

For the background, I will quote Greg Fallis who laid the history out:

Back in 1987 there was a global stock market crash. … Arturo Di Modica, a Sicilian immigrant who became a naturalized citizen of the U.S., responded by creating Charging Bull – a bronze sculpture of a…well, a charging bull. It took him two years to make it. The thing weighs more than 7000 pounds, and cost Di Modica some US$350,000 of his own money. He said he wanted the bull to represent “the strength and power of the American people”. He had it trucked into the Financial District and set it up, completely without permission. It’s maybe the only significant work of guerrilla capitalist art in existence. People loved it. The a**holes who ran the New York Stock Exchange, for some reason, didn’t. They called the police, and pretty soon the statue was removed and impounded. A fuss was raised, the city agreed to temporarily install it, and the public was pleased. It’s been almost thirty years, and Charging Bull is still owned by Di Modica, still on temporary loan to the city, still one of the most recognizable symbols of New York City. 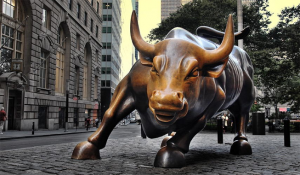 Then, on March 7, 2017, the day before International Women’s Day, Fearless Girl appeared, standing in front of Charging Bull. 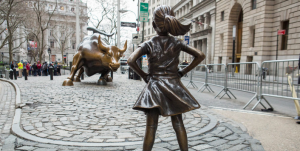 This appears to be another work of guerrilla art – but it’s not. Fearless Girl was commissioned by State Street Global Advisors, an investment fund with assets over US$2.4 trillion (that’s with a “T”). It’s part of an advertising campaign for State Street’s “Gender Diversity Index” fund (NASDAQ ticker symbol: SHE.) Beneath Fearless Girl is a bronze plaque that reads: “Know the power of women in leadership. SHE makes a difference.” (SHE, the fund symbol, not she, the pronoun.)

The sculptor, Kristen Visbal, said this about her statue: “She’s not angry at the bull – she’s confident, she knows what she’s capable of, and she’s wanting the bull to take note.” In other words, according to Fallis, “Fearless Girl derives its power almost entirely from Di Modica’s statue.” 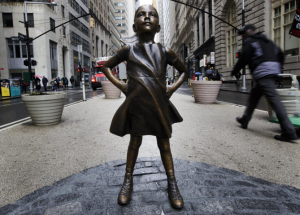 Arturo Di Modica wanted Fearless Girl removed. It was, briefly, but there was a public outcry, and she was returned to her position facing the bull, this time on a temporary permit from the city. As Fallis said, “It’s all about the bull. If it were placed anywhere else, Fearless Girl would still be a very fine statue – but without facing Charging Bull the Fearless Girl has nothing to be fearless to. Or about. Whatever. Fearless Girl, without Di Modica’s bull, without the context provided by the bull, becomes Really Confident Girl.”

So what’s going to happen? Has Fearless Girl in some way infringed on the artistic rights embodied in Charging Bull? Do artists have the right to control the context in which their works are displayed? Would Charging Bull have the same meaning if it were displayed in the middle of a Texas prairie? In the middle of Tiananmen Square? Is it okay to hang a Picasso next to your kid’s crayon drawing on your refrigerator?

The Doc’s head hurts just thinking about all of this. One thing is certain, however, and that is that this is NOT a copyright issue, despite the law suit threats made by DiModica’s attorney. At the end of the day, DiModica still owns the bull, and he can do what he wants with it (including moving it.) Fearless Girl is a very clever advertising scheme, but the message is almost certainly lost on just about everyone who is not a stock trader, and she (not SHE) sends a message, as New York Mayor Bill DiBlasio tweeted, that “Men who don’t like women taking up space are exactly why we need the Fearless Girl.”

The Doc thinks that there is a compromise here.  They should just turn Fearless Girl around so that she has her back to Charging Bull. Now THAT’s fearless!

Have an intellectual property question that’s been nagging at you? Ask the attorneys at LW&H. They seem never to be able to get enough of this stuff.