Dear Doc:
I’ve heard that when the Post Office makes a mistake in printing a stamp, they can really increase in value. I’ve also heard that the USPS made a whopper of a mistake that is headed for court soon. What can you tell me?
Signed,
Phil A. Telist

You heard right on both counts! (Good for you, but shouldn’t you be outside playing?)

The most valuable US stamp collected is the “Inverted Jenny”, where the image of a biplane was printed upside down on about 100 stamps. A block of four of these sold for $2.97 million in October 2014. There are many mistakes that make stamps valuable, especially when the mistake is caught and only a very small number of defective stamps make it into circulation, rather than into the shredder at the Bureau of Printing and Engraving. 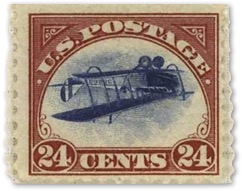 Back in 2010, the USPS made a different kind of mistake. They wanted to issue a “forever” stamp honoring the Statue of Liberty (you know, the one that says “Give me your tired, your poor, Your huddled masses yearning to breathe free, The wretched refuse of your teeming shore. Send these, the homeless, tempest-tost to me, I lift my lamp beside the golden door!” – what a quaint sentiment!)  Anyhoo, the went looking for a photo of Lady Liberty, and from that, they created a new stamp: 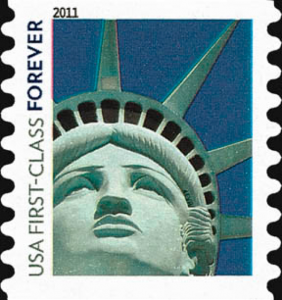 Pretty cool, except, according to sculptor Robert S. Davidson, it wasn’t. Oh say, can’t you see, said Davidson – that Lady Liberty is mine, and she stands proudly in the sweltering heat of Las Vegas, Nevada, rather than in New York harbor. She welcomes a different kind of loser from the one that was sculpted by Frédéric Auguste Bartholdi and constructed by Gustav Eiffel, and then shipped to the New World in the 1880s. Davidson’s LL stands astride a casino called “New York, New York”. According to Davidson, his LL, “brought a new face to the iconic statue – a face which audiences found appeared more ‘fresh-faced,’ ‘sultry’ and ‘even sexier’ than the original.” Davidson says that any idiot could tell the difference because, his LL has a, “fuller chin, a friendlier expression and pronounced cupid’s bow shape  of the upper lip”.

The Postal Service knew before issuing the stamp that they had the wrong lady, but, according to Davidson’s lawyers (see, you knew there were lawyers mixed up in here somehow), the USPS went ahead anyway without seeking a license from Davidson. The printed a few stamps: about 4 billion at first. In 2013, Davidson filed a law suit claiming copyright infringement. He asked for damages, but did not specify in his complaint how much those might be.

In a similar suit that the USPS lost, a sculptor was awarded $685,000 after the Postal Service used a photo of a Korean War memorial he had designed. The court awarded a royalty of 10% on sales of the stamps to collectors and on sales of merchandise featuring the stamp design (but not on stamps sold just to be used a postage and thrown away.)

Recently, in the Davidson case, Federal Claims Court Judge Eric G. Bruggink rejected summary judgment motions, and scheduled a trial to begin on September 11, 2017. The USPS argued that, “photographic copying of a public architectural work does not constitute copyright infringement.” “The premise behind the government’s defense is … wrong,” Judge Bruggink wrote.

The “Doc” has no idea how much Mr. Davidson will be awarded at trial. The Doc also has no idea how much of a cut the lawyers will get, or whether MGM Resorts International, which owns the New York, New York Casino will just come up three bars and walk away with the pot. Perhaps the best summation is the one offered by Mr. Gordon Absher, spokesman for MGM Resorts International, “Everyone thought the post office was honoring just one great American institution when in reality they were honoring two – the Statue of Liberty and Las Vegas.”

And there you have it, folks…a handy new definition of a “great American institution.” By that calculus, Ms. Kim Kardashian’s derriere is, as well, and the Doc will leave you to ponder the state of what makes America great nowadays.

Have a question about unauthorized reproduction of your copyrighted work? Call the attorneys at  the firm of LW&H…truly a Great American Institution. Until next month, stay cool.