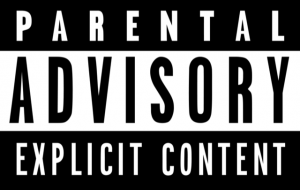 Last I heard, “Slants”, a term some Asians apparently find offensive was deemed to be a registrable trademark by the United States Supreme Court because they think that free speech under the First Amendment protects all sorts of offensive speech (but not the giant Ten Commandments that was put up at at the Alabama Supreme Court, go figure!)  It seemed like the Washington NFL team would once again be able to register “Redskins”, but there were still limits to what could be a registered trademark. Is it just me, or does it seem that offensive words are invading our society, and that we are all going to H E double chopsticks here?
Signed,

The First Amendment to the United States Constitution prohibits the government from, among other things, censoring speech. Speech is a broad term that covers more than just making sounds with your pie-hole (as the kids say nowadays, even though that’s pretty vulgar.) Speech can be a performance of drama or music, or a display of art. Producing a movie and distributing it in theaters, on television and on the Internet, or just spending money to do so is also considered protected free speech (although spending giant piles of anonymous corporate money can be considered vulgar, too.) (Citizens United v. Federal Election Commission, 558 U.S. 310 (2010))

There are just nine types of expression that are not protected under the First Amendment: obscenity, fighting words, defamation (including libel and slander), child pornography, perjury, blackmail, incitement to imminent lawless action, true threats, and solicitations to commit crimes. In addition, treason involving speech and copyright infringement are not protected speech under some case law. Everything else is pretty fair game.

On December 15, 2017, the Court of Appeals for the Federal Circuit (CAFC) decided a case involving registration of the trademark “FUCT” for various items of clothing. The Patent and Trademark Office had refused to register this mark under §2(a) of the Lanham Act, finding that it was immoral or scandalous because it is the past tense of the verb “fuck” which they considered vulgar, and thus scandalous. (For a full discussion of the conjugation of the verb, click here) The “Doc” notes that FUCT is a slang term, and even though the Trademark Office found it was the past tense, extensive research on the Internet (which contains a lot of slang, and also a lot of vulgarity) revealed that you should properly ad “ed” to the verb to make it past tense. By now, you may be pretty tense, yourself, reading all of this vulgarity in a law firm newsletter! If so, the “Doc” recommends that you just chill-the-F-out, and read on…

The CAFC, applying the Supreme Court’s Tam decision, reversed the Trademark Office’s refusal to register the trademark. It took the three judges fifty pages of single-spaced type to explain their decision. They reviewed the history of offensive marks that could not be registered, including MADONNA for wine, to QUEEN MARY for women’s underwear, BUBBY TRAP for brassieres, and BLACK TAIL for magazines.) The Court did a full deep dive on the FUCT mark, searching the Internet and concluding that it was, indeed, the past tense of fuck. They, like the Trademark Office, concluded that the mark was vulgar. The Court did note that there are other definitions of the term, including an acronym for “Failed Under Continuous Testing”, meaning broken beyond repair. (“Is the TV broken?” “Yup, it’s FUCT”) It’s also a slang contraction of the term “fun fact”, meaning trivia. None of this mattered, however, as the judges could not seem to get their minds out of the gutter, as we used to say in elementary school.

The Court then went on to conclude that the Lanham Act §2(a) prohibition on registration is unconstitutional as a “content-based restriction on free speech.” Such prohibitions are presumptively invalid unless the government can prove, “that the restriction furthers a compelling [government] interest and is narrowly tailored to achieve that interest.” (cites omitted.) This approach is known as “strict scrutiny”, and the trademark law failed the test.

The Trademark Office, for its part, said that the trademark, “objectifies women and offers degrading examples of extreme misogyny” and contains a theme “of extreme nihilism” with “anti-social imagery” and is “lacking in taste”). While the Court agreed, it found that, “These are each value judgments about the expressive message behind the trademark.”

The judges concluded, in part, “The trademark at issue is vulgar. …We find the use of such marks in commerce discomforting, and are not eager to see a proliferation of such marks in the marketplace. …There are countless songs with vulgar lyrics, blasphemous images, scandalous books and paintings, all of which are protected under federal law. …There are words and images that we do not wish to be confronted with, not as art, nor in the marketplace. The First Amendment, however, protects private expression, even private expression which is offensive to a substantial composite of the general public. … We hold that the bar in § 2(a) against immoral or scandalous marks is unconstitutional because it violates the First Amendment.”

So, Roy, the “Doc” is gonna go wash his mouth (and fingers) with soap, and read an old Hardy Boys mystery, where the most offensive word is “ejaculated” (meaning “exclaimed forcefully” – get your mind out of the gutter!) By the way, that Ten Commandments violated another part of the First Amendment – the establishment clause that makes it illegal for government to get into the religion business.

Have a trademark, no matter how vulgar? The attorney at LW&H can help you register your filthy, dirty, disgusting mark under federal law. Call them!