I hear that although a monkey can’t own a copyright, a cat can be both a copyright and a trademark, and is worth a whole lot of money. What gives? Judges don’t like monkeys, but love kitties? What kind of law is that?

Like anything in the law, it’s just not that simple. No… monkeys can’t hold copyrights, at least not in the United States. The Doc has written about that before. Now, as to cats, it seems that not just ANY cat can be the subject of intellectual property rights, but one very special feline has recently hit the legal jackpot. The lucky cat? GRUMPY CAT© ™ 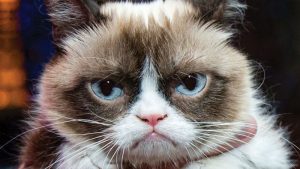 You see, CC, this cat named Tardar (sic) Sauce was born with what, in any sane world, would be an unfortunate expression of disgust on its puss. The cat’s owners, recognizing that the Internet is not part of any sane world, formed a company called, appropriately, Grumpy Cat LLC, and proceeded to license the cat’s likeness to companies interested in marketing goods and services under the Grumpy Cat brand. (Don’t ask the Doc why.)

Among the licensees was a coffee company called Grenade, which wanted to market Grumppuccino brand coffee with the cat’s picture on the label. Grenade paid $150,000 to obtain this right.

According to a law suit brought by Grumpy Cat LLC, Grenade also started selling T-shirts and roasted coffee, stuff that they did not tell Grumpy Cat LLC that they planned to sell using the cat’s ugly face. Of course, they got sued.

Grenade, of course, counter-sued, claiming that they had been assured that Grumpy Cat would be starring in a movie along side Jack Black, but that no such movie had ever been produced. For her part, Grumpy Cat appeared in court, to the delight of the jury, but, it seems, she was not present for the reading of the jury’s verdict, which awarded $710,000.00 to her owners.

It seems that the jury agreed that Grenade had exceeded the scope of the license it had negotiated, and that its profits from all sales beyond Grumppuccino brand coffee should belong to Grumpy Cat (who, it must be assumed, is now more amused than grumpy, though her valuable expression has not changed even a tiny bit.)

The Doc thinks that the moral of this kitty’s tale is simple: if you take a copyright and trademark license, you’d better not monkey around. You’d better not kibble over the royalties. Don’t think that before a jury, you’ll get nine lives. Have your lawyer write a purrfect agreement, thereby avoiding cat-astrophic consequences.

Have a copyright or trademark issue? Talk to the cool cats at LW&H. They can help you land on your feet. Until next month,