I know that Mickey Mouse is still enjoying copyright protection because of the Sonny Bono Copyright Term Extension Act, and that once copyrights expire, characters become “public domain”. How can you explain some of the direct knockoffs I have seen at the Halloween stores, like “A-Lad-In A Costume?”

Under US Copyright Law, a fictional character that is sufficiently well developed may be protected by the copyright holder. Just what is sufficient is a matter for judges and juries to determine under the facts of each case, and also by considering fair use principles and the free speech under the First Amendment. It’s complicated, as the kids say nowadays.

In Nichols v. Universal Pictures Corp., the famous Judge Learned Hand (yup, that is his real name) stated that, “the less developed the characters, the less they can be copyrighted; that is the penalty an author must bear for marking them too indistinctly.” For example, aliens stranded on Earth is a popular and recurring theme as portrayed in My Favorite Martian, Starman, Alien Nation, Transformers, District 9, Predators, and The Man Who Fell to Earth. The idea of a stranded alien character, without more detail, is not protectable. Add details, such as a big head on a long neck, a glowing finger, and a catch phrase like “phone home”, and you have a fully protected character, E.T., and nobody can legally copy him.

However, (and the Doc being a lawyer, there’s always a “however”), balancing other considerations may provide a loophole big enough through which to drive Sherman’s Army. We know the characters of Margaret Mitchell’s “Gone With the Wind” (even if Rhett Butler never did say “frankly” in the famous line in the book.) In the 1970s, an “adult” movie called “Scarlett Fever” ran afoul of copyright by using characters from the book without permission. (Metro-Goldwyn-Mayer, Inc. v. Showcase Atlanta Cooperative Productions,Inc. Adult movie producers are very creative, having given the world such classic titles as “The 69th Sense”, “The Beaverly Hillbillies”, “Driving Miss Daisy Crazy”, and “Position: Impossible”, but the Doc digresses…) Fast-forward a couple of decades, and another court allowed use of the famous characters in a new novel, told from the perspective of the African-American characters, “The Wind Done Gone”. ( Suntrust Bank v. Houghton Mifflin Co..)

When it comes to Halloween costumes, most of the Asian manufacturers want to be able to market the latest characters without running into legal trouble. That’s why they get creative with the names, which are often more protected than the appearance of the character. So, instead of using Aladdin (which Disney purloined from the 1001 Arabian Nights, but don’t get the Doc started on cultural appropriation by Disney), costume makers sell “A-Lad-In a Costume”. But don’t forget “Sidekick Bros.” (instead of Mario), “Juice Demon” (Beetlejuice), and too many others to name. 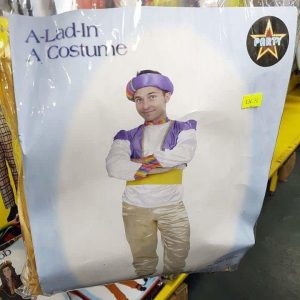 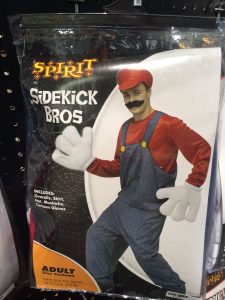 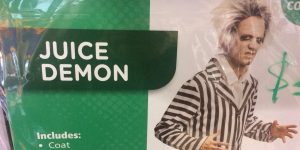 Have a knockoff that you’re not sure is over the line? Give the attorneys at LW&H a call. Each one of them is a unique character in his own right.