Shakespeare, in Henry VI, Part 2, has Dick the Butcher say, “The first thing we do, let’s kill all the lawyers.” Now I know how he must have felt. You see, my friend and I filed a writ of habeas corpus in court in New York. We are being held prisoner, and we wanted to be transferred to another location that would allow us time outdoors, good food, and to be with people who love and respect us. The New York lower courts denied our motion, and the New York Court of Appeals denied us the opportunity even to appeal. Can you explain how this could happen? 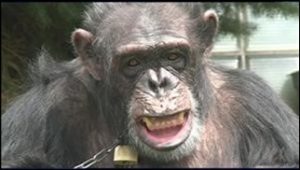 Kiko, friend of Tommy the Chimpanzee

Dear Tommy (and your friend Kiko, too):

The Doc is sorry to hear of your predicament. I know that you must be writing because the Doc has recently written about Naruto, a monkey who tried to assert a copyright claim to a “selfie”, but whose claim was rejected by the Ninth Circuit Court of Appeals just because he’s a monkey! Now the New York courts are telling you that just because you’re a chimpanzee, you can’t file a legal challenge to be released from small cages in a warehouse and in a storefront, to go live in a primate sanctuary with other chimps. I know this is a cruel result, but let the Doc try to explain…

In our society, many people believe that courts are able to correct everything that may be wrong, and solve every injustice. Lawyers have tried to promote the image that the legal profession is the guardian of all rights, and the champion of the oppressed. That is why lawyers often try to explain the Shakespeare quote by saying that Dick and his buddies were plotting to overthrow the King, and that they wanted to do away with the lawyers because the lawyers stood for the order in society. Good try, attorneys, but Shakespeare was just doing what people have done since law was invented: making a lawyer joke!

You see, Tommy, judges and the lawyers who appear before them are constrained in our country by both the written statutes passed by the legislatures (state and federal), and “precedent”, meaning the tradition that earlier decisions should generally be respected by later courts, unless there is a really good reason to change them. This is called “stare decisis“, a Latin phrase meaning, “to stand by things decided” (since in law school they teach you that nothing is better than using a Latin phrase, especially where a perfectly good English term would have sufficed!)

In your case, Justice Fahey hit the nail on the head. He said “The inadequacy of the law as a vehicle to address some of our most difficult ethical dilemmas is on display in this matter.” The issue, as you know, being a chimpanzee, is whether you are a “person” or a “thing” for the purpose of the law. Traditionally, only persons could petition for habeas corpus (that being an order to be delivered from captivity.)  Justice Fahey opined that the statute does not define “person” but that dictionaries say that it means an “entity…that is recognized by the law as having most of the rights and duties of a human being”. The lower court says that chimps lack, “the capacity or ability . . . to bear legal duties, or to be held legally accountable for their actions” (Matter of Nonhuman Rights Project, Inc. v Lavery, 152 AD3d 73, 78 [1st Dept 2017].

You had a few legal and other experts on your side, including famous Harvard law professor Laurence Tribe, who pointed out that human infants do not qualify under this definition, and yet nobody has ever said that they cannot benefit from a habeas corpus writ! (Lots of philosophers, too) No matter, said the judges in your case. In New York, at least, you’re not a “person”. Game over. At least in court.

Justice Fahey did go on at length about the ethical issues your case raised. He concluded, “The issue whether a nonhuman animal has a fundamental right to liberty protected by the writ of habeas corpus is profound and far-reaching. It speaks to our relationship with all the life around us. Ultimately, we will not be able to ignore it. While it may be arguable that a chimpanzee is not a “person,” there is no doubt that it is not merely a thing.” The Doc could not agree more.

For the Doc, your issue is one part of a larger moral conflict that every “person” on our planet should now face: how do we work together to preserve our environment for future generations, both human and not? This issue may be one that will require not just legislative action, but that of our leaders in religion, philosophy, multinational organization, and yes, judges and lawyers, as well.

For guidance, the Doc turns to another Doctor… Seuss. Horton the Elephant famously opined, “A person’s a person, no matter how small.” To which, the Doc adds, “or hirsute.”

Are you arguably a human? Have an intellectual property legal issue? Call the attorneys at LW&H. They’re mostly human, too and would love to help out.  Until next month,