John Wayne’s Estate and Duke U. engage in TM Dispute

What’s new in your neck of the woods?

It’s been a slow month for copyright law. Trademarks, however, have been a hotbed of ridiculosity. Exhibit One: John Wayne’s heirs have filed a law suit against Duke University (which was Trinity College until 1924 when it was renamed in honor of *cough* tobacco magnate Washington Duke) over the trademark rights to the word “Duke.”

John Wayne was born Marion Robert Morrison in 1907. He was “the Duke” for reasons lost to the mists of time. John Wayne Enterprises (“JWE”, a company run by his family) has filed suit in federal court in California, asking a judge to find that they can use the word “Duke” on bourbon, tequila, and scotch without infringing on Duke University’s trademark.

JWE filed applications to use the trademarks “Duke” and “Duke John Wayne” on alcoholic beverages. According to Ethan Wayne, the actor’s son, his late father had an, “unfulfilled dream of distilling fine spirits.” (On the other hand, the “Doc” has a fulfilled dream of consuming them, but I digress…) Ethan Wayne is a partner in Monument Valley Distillers, the company that makes Duke booze. Duke University responded by filing an objection in the U.S. Patent and Trademark Office. This gunfight is not new, however. The university has also tried to block JWE from using “Duke” in connection with a John Wayne-themed restaurant and celebrity licensing services. The school claimed in its filing that because the beverages that JWE sells are, “closely related to goods and services” that bear the university’s mark, granting a trademark registration to JWE would confuse consumers.  (The “Doc” has visited the University, and has researched it extensively, and can say without fear of contradiction that there are many students at Duke University who also consume large volumes of fine, and not-so-fine spirits, and who, as a result, are pretty confused much of the time.) 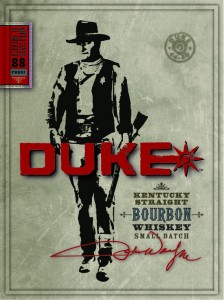 “Duke University is not and never has been in the business of producing, marketing, distributing, or selling alcohol,” stated JWE in its complaint. “On information and belief, the actual and potential customer base of Duke University is vastly different from the customer base of JWE.” (Again, the “Doc” asks, have they NEVER been on a college campus on a weekend???) JWE concedes the University uses the “Duke” mark “in connection with the sale of its university-related products and services.” But, they say, “Duke University does not own the word Duke in all contexts for all purposes.”

The USPTO database lists 292 registered trademarks that use the word “Duke”. Among these are “Daisy Dukes”, “Honeydukes”, “Duke Nukem”, “The Royal Foundation of the Duke and Duchess of Cambridge and Prince Harry”, “Duke Kahanamoku” (surf’s up, dude!), “Duke Ellington”, “Randolph Duke” (orange juice, anyone?), and “The Dukes of Hazzard”. Where will it all end? The “Doc” is clueless, but hopes that the parties can just decide to have a party, invite Wills, Cathy, Harry, and Pippa (especially Pippa), serve Duke bourbon at Duke University, and bury the tomahawk.

Confused? Ask the attorneys at LW&H to explain it to you (especially the Daisy Dukes) since they seem to love disputes over trademark rights, and all other forms of what they humorously refer to as “intellectual” property. Until next month, the “Doc” urges you to trademark responsibly. Friends don’t let friends brand confusingly.