The NRA and the Bean 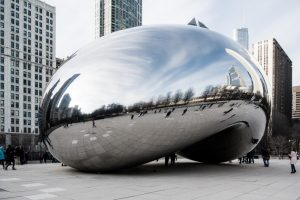 The National Rifle Association (“NRA”) conjures up many things for many people:  gun lobby, gun rights, 2nd Amendment, just to recite a few.  It’s name, however, has rarely arisen in the intellectual property context until recently.  Here is some background.

One of Chicago’s famous public sculptures, “Cloud Gate”, affectionately known as the “Bean”, is an icon of the Chicago cityscape.  Designed by British artist, Sir Anish Kapoor, Cloud Gate won a competition staged by Chicago’s Millennium Park officials in 1999.   Here’s what Wikipedia says about Cloud Gate:

Kapoor’s design was inspired by liquid mercury and the sculpture’s surface reflects and distorts the city’s skyline. Visitors are able to walk around and under Cloud Gate’s 12-foot (3.7 m) high arch. On the underside is the “omphalos” (Greek for “navel”), a concave chamber that warps and multiplies reflections. The sculpture builds upon many of Kapoor’s artistic themes, and it is popular with tourists as a photo-taking opportunity for its unique reflective properties.

As the description states, Cloud Gate is a popular photographic subject, particularly for tourists.  The sculpture has also appeared in films and music videos.  In June 2017, Cloud Gate appeared for less than a second in an NRA video called “The Clenched Fist of Truth“, a controversial video with the message that

a liberal insurgency is destroying American society. The “only way” to protect yourself from this surge in left-wing violence (a made-up threat, to be clear) is to donate to the NRA – an organization that exists solely to help people buy guns….

Kapoor demanded that the image be removed from the video but the NRA refused.  In June 2018, Kapoor sued the NRA for copyright infringement, demanding statutory damages of $150,000 per infringement, attorneys fees and a share of the NRA’s profits from donations derived from the video.  Putting aside Kapoor’s political motivations, which appears to be one of the driving motivations for the lawsuit, does Kapoor’s lawsuit have a basis in copyright law?The essence of Kapoor’s lawsuit is that the NRA has infringed his copyright by creating an unauthorized “derivative work.”  According to the Copyright Office’s Circular 14,

A derivative work is a work based on or derived from one or more already existing works. … Only the owner of copyright in a work has the right to prepare, or to authorize someone else to create, an adaptation of that work. … The unauthorized adaption of a work may constitute copyright infringement”  (emphasis added).

By creating a video containing an image of Cloud Gate, the NRA has created an unauthorized adaptation of Kapoor’s sculpture, that is, a derivative work. But what about the fact that Cloud Gate is a public sculpture?  That does not matter.  Assuming the public art is not in the public domain, photographs or videos of the work can be deemed infringing derivative works.  At one time, any professional photographer who wished to capture an image of Cloud Gate could be barred by Millennium Park security if they didn’t purchase a rather expensive license. Chicago changed that policy in 2005 but still required commercial licenses:

Permits will be set on a “negotiated basis,” she said, for movies, commercials and other “large-scale” projects shot at the park. Those wishing to publish or otherwise commercially disseminate images of the art there will need permission from the respective artist’s representatives…

It appears that the NRA created an infringing derivative work but there is another question for consideration. Does the NRA’s use of the image qualify as fair use? If it does, the NRA did not need a license. Under Section 107 of the Copyright Act, “fair use” must fall within defined categories: “criticism, comment, news reporting, teaching …, scholarship, or research.” If the work qualifies, fair use determination requires a further complex analysis of four factors: (1) the purpose and character of the use, (2) the nature of the copyrighted work, (3) the amount and substantiality of the portion used in relation to the copyrighted work as a whole, and (4) the effect of the use upon the potential market for or value of the copyrighted work. The results of the four-factor analysis are not always predictable, making fair use a tricky area of the law.

So, does Clenched Fist fall within one of the required fair use categories?  It would not be unreasonable to conclude that Clenched Fist is “comment” but does “comment” embrace political speech?  It might, so there may be First Amendment reasons to dismiss Kapoor’s suit.  Yet, the First Amendment rationale could be outweighed by the commercial purpose of the video. Then again, Cloud Gate appears for less than a second (the “substantiality” test). That may not matter, though.  The video displays a fleeting series of iconic and recognizable American architectural and sculptural works. Despite its brief appearance, one can immediately recognize Cloud Gate (and the other works) in the video.  These competing factors make the fair use analysis difficult.  A deep dive into fair use law is beyond the scope of this article so we’ll have to let the court weigh in.  Expect another article once the court rules.