Ask Dr. Copyright — Can you copyright a flavor?

I’ve read that you can’t copyright a recipe. The US Copyright Office says, “Copyright law does not protect recipes that are mere listings of ingredients. Nor does it protect other mere listings of ingredients such as those found in formulas, compounds, or prescriptions.” On the other hand, I’ve read that some things like colors (pink for fiberglass insulation), sounds (the NBC tritone) and odors (Chanel No. 5) may be registered as trademarks. What about protecting flavors, Doc?

The courts in the Netherlands recently were called on to consider the case of Heks’nkaas (“witches’ cheese”) and whether that cheese was infringed by “Magic Cheese” from another company. Levola, a food company, bought the recipe for Heks’nkaas cheese spread from a Dutch grocery in 2011. It asked to register a copyright in the distinctive flavor of Heks’nkaas. It seems that Levola was pretty cheesed off that they had competition.

In some countries, designations of origin, such as France’s appellation d’origine contrôlée (AOC), Italy’s denominazione di origine controllata (DOC) or Spain’s denominación de origen (DO) function like certification marks and are used to distinguish ingredients or foods that come from a particular region, such as Champagne, parmigiano-reggiano, Roquefort and some olive oils. In the United States, geographic designations are not generally protectable as trademarks, and are not copyrightable because they are not considered “works of authorship”. Keep in mind, trademarks protect the identity of the source or origin of the goods marked, but not the goods themselves, while copyrights protect the expression of an idea, but not the idea itself…got that? (If you’re confused, you’re not alone. Even the US Supreme Court sometimes has trouble keeping this stuff straight.)

Even if a particular trademarked ingredient is used in a dish, protection of the recipe does not follow, and protection of the flavor of the dish is quite difficult (but not impossible) to obtain as a trademark. How are cookbooks protected, you may ask? According to the US Copyright Office: “Copyright protection may, however, extend to substantial literary expression-a description, explanation, or illustration, for example-that accompanies a recipe or formula or to a combination of recipes, as in a cookbook.” Flavors, however, do not fall under one of the enumerated categories of copyrightable subject matter, and thus, as a matter of law, may not be registered for copyright. “Hard cheese”, as the Aussies would say!

So how did Levola fare in Dutch law? The court started its discussion by stating that a work can only be protected by copyright if the product has its own and original character and carries the personal mark of the author. Levola submitted an expert report stating that the taste of Heks’nkaas was original and very creative, and was more than the sum of its parts. The judge then sampled the product to experience its taste, and concluded that the expert report had more holes than Swiss cheese, and that the combination of the ingredients did not lead to a surprising result. The Dutch court concluded that Levola failed to prove that the threshold for copyright protection was met, so the court did not have to answer the question of whether it is even possible to claim Dutch copyright protection for taste. The Doc thinks this was a gouda decision. 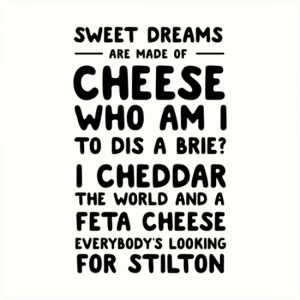 Do you have a recipe that was passed down to you by your Great Uncle Colby? Does it have a unique smell, color, or taste, like Limburger, but slightly sweaty? Do you want to protect it with legal documents so airtight that it will be like schmear on a bagel? Talk to the attorneys at LW&H…they really know their cheese (even if the cat’s just eaten it.)