Breaking News: Ghostbusters Prevails Over Day of the Dead

Late Breaking News: Ghostbusters Prevails Over Day of the Dead After Initial Defeat

If you’re a vodka connoisseur, you probably know that Dan Aykroyd of Saturday Night Live, the Blues Brothers, and Ghostbusters fame partnered with another artist and Globefill, Inc. to manufacture and market vodka packaged in a skull shaped bottle and labeled as Crystal Head Vodka.  Here it is: 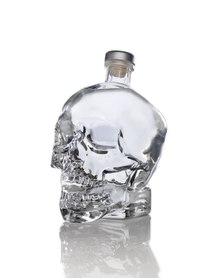 It must be a very successful brand because Globefill has been engaged in a long, expensive battle with a competitor, Elements Spirits Inc., who sells KAH brand tequila in the same skull-style bottle:

“Trade dress,” according the well-known Louis Vuitton decision, refers to the “total image” of the business, good or service “as defined by its overall composition and design, including size, shape, color, texture and graphics.” Examples of trade dress include the shape and color of a pill capsule, a magazine cover format, the shape of perfume and water bottles, briefcase style, and more. A claim for infringement requires the plaintiff to allege that the defendant has copied the stylistic, not the functional, elements of trade dress. So, Globefill is complaining that Elements copied its trade dress by bundling spirits in a similar skull-shaped bottle.  You don’t have to be an expert to see that both spirits are bottled in a skull-shaped container.  But, really, is the “shape, color, texture, and graphics” similar or confusing?  You be the judge and see if the jury agrees:

Globefill’s lawsuit went to trial in 2013.   According to reports of the trial, Globefill argued to the jury that they just “painted our bottle.” They contended that Elements’ bottle was simply a cheap Chinese knockoff while Globefill “searched around the world to find a glassmaker in Italy that can make a bottle of the appropriate quality.” Element’s lawyer told the jury that her client, inspired by the founder’s Mexican – American Heritage, launched a tequila brand with the Day of the Dead theme. That holiday has unique characters in decorations that are exhibited on the tequila bottle. The bottles are works of art not cheap knockoffs, she argued. Apparently, the jury was not confused and returned a verdict in favor of Elements.

But there’s a twist (and it’s not lemon).

Globefill appealed the verdict to the Ninth Circuit Court of Appeals. That court reversed on grounds that Elements “had improperly referenced similar legal proceedings in Mexico during its closing statements in the trial.”

The Ninth Circuit’s reversal opened the door for a new trial. Evidence in the second trial went to the jury and on March 15, 2017, Globefill prevailed.  The jury found that consumers would be confused as to the source of the spirits sold in the two bottles.  We’re confused, too.   We will report on the second trial as we learn more.